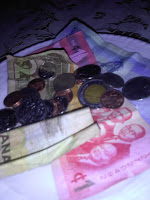 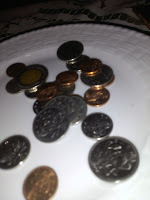 You are not alone.

To write a series of articles on hotel food and beverage service from the point of view of servers without touching on any of the above often-confused terminologies would be unpardonable on my part.

It is therefore apt to use this last article of the series for this discussion; after all, how much a diner tips is usually the last impression the diner makes on the server!

By the way, a passing comments on the above pictures:currently bill folders/check holders have displaced the previous way of ‘dishing out’ tips in most hotel food and beverage outlets, making them more discrete. Bravo!

Now to establish a common understanding of the above terminologies:

A ‘tip’ is synonymous to ‘gratuity.’ It is a voluntary payment given over and above the amount of the bill as a “personal reward” from a diner to waiting/service personnel. As an example, the bill could be 130ghc and I, the diner, decide (based on several factors) to give a tip of 20ghc.

A service charge is an amount (determined by the hotel/establishment) added to a diner’s bill before the bill is presented to the diner. The amount is almost always based on a percentage of the bill. In Ghana, it seems to be mandatory. A bill amount of 130ghc with a service charge of 15% will bring the total amount to be presented to the diner, 149.50ghc. Since most hotel restaurants are silent about the tip, diners may feel obliged to tip the server in spite of the service charge and particularly if they wish to acknowledge and appreciate the service rendered by the server. assuming a diner decides on a tip of 20ghc,  a diner is likely to round up the 149.50 to 150ghc and add the tip of 20ghc.  Generally diners are generous.

A ‘cover charge’ is less commonly used but it exists and it is a fixed charge per customer. This is also mandatory. It is expected to cover entertainment cost (of a live band) incurred at a restaurant or nightclub in addition to the charge for food and drink.

Several years ago when I entered the industry the concept of tips in the hotel arena was most confusing. Perhaps it still is. Many employers suggested ‘tip pooling,’ where all employees who received tips were required to ‘surrender’ all or a specified percentage (depending on the policy of the establishment) to the ‘pool’ (referred to as tronc pool). The total amount in the ‘pool’ was shared among the group of employees in the department (including the kitchen staff in the case of the food and beverage department) at specified periods; weekly or monthly. This practice did not go down well some personnel (you may guess who and why)! There were other issues though:

the question of honesty of servers on the tips declared.

the issue of bar staff  not being considered as part of food and beverage service (since they hardly rely on kitchen in the production of their cocktails and the service of their drinks).

the question of who gets to keep the pool of tips until it is ready to be shared.

the question of where  to keep the pool of tips; at a bank? a manager’s office ? the house of a staff member in the pool?-each had its complications.

the question of when and how to share the tips (frequency and by seniority or degree of interaction with diner).

It got murky when employers suggested that a percentage of the pool should be used for items such as disposables since those items were being ‘wasted’ by personnel. It got murkier still when diners realized/found out that not all the tips went directly to the servers whom they were rewarding for good service.

Then service charge was introduced. It was mandatory.  Was this to replace tips? While some hotels insisted that ‘service charge’ was replacing tips, others were mute about it, entangling diners even the more in the confusion.

This issue of where tips go and how much is kept by the restaurant has long confused diners not only in Ghana. But let’s stick to our boundaries since in the countries where the system of tipping is quite well established, there is usually a mutual understanding among the givers/diners and the recipients/servers.

Tips are considered as gestures of appreciation from diners for good service received. Our servers know this very well and apparently always look forward to be tipped particularly in the more upscale hotels. I am told servers are motivated to offer even better services next time, not only to the giver but to others as well. This is debatable. What I have observed of servers over the years is an ‘abuse’ of the tipping system with certain diners being labeled as ‘fat tippers.’ Servers seemingly give preferential treatment to their ‘preferred diners’ at the expense of others who tip little or do not tip all.

Restaurant  tipping is a widespread form of social behavior. Psychologically  the size of the amount of tips matters to servers, whether the system is developed or not. Telling a server to keep the change when the change is perhaps 3ghc after a well enjoyed meal experience with a bill amount of 257ghc may be likened to ‘stabbing the server at the back’ if the server’s ‘eyes are on the tip’ (literal translation from vernacular)!

Although tips show a sign of gratitude, servers should not always expect to receive them; it takes maturity to develop this attitude. Being professionals as I expect them to be, servers must not allow the amount of tip or the frequency of tip from the same diner to distort the quality of service or become a factor to discriminate in rendering service. At the end of the day, in whatever capacity our servers find themselves, they must endeavor to give their all towards providing exceptional service consistently, irrespective of who the diner is.

When I was playing the role of a server, I was the only one who knew how much effort went into each service I rendered. There were times I felt I was taken for granted but what kept me going was the thought to honor God in everything. I got some motivation from Nehemiah, a king’s cup-bearer (sommelier in our current terminology) and in the Acts of Apostles, where wise and godly men were required to wait on tables (all in the Bible)!

While our industry needs to help in developing the system of tipping, servers must do their bit -you never know when that ‘Golden Hand’ will pick you up to you-know-not-what; far beyond your expectations and comprehension!

HOTEL FOOD AND BEVERAGE SERVICE; THE MOMENT OF...