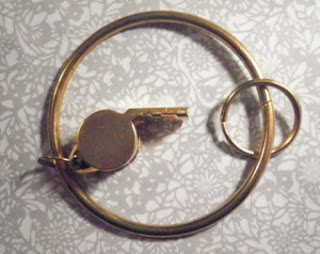 The image on this page is temporarily displacing the bridge image I have been using since my discussion on ‘bridging the gap between hospitality education and hospitality industry’.

As you can see it is a whistle key bangle. Its story unfolds.

I had completed my schooling in a college town and found a job in a much bigger city, St Louis. I am not too sure how I met the three young ladies, but I stayed with them only a few days before moving into my own apartment. I cannot remember now the specific countries they were from. However, I do remember they were South Americans. They gave me a whistle with a large ring, just like the image you are seeing. I was to wear it as a bangle.

I was taken through a whole drill on how to use the whistle key bangle, should I be at risk on my return from work. I was then working the night shift at a hotel and where we lived was considered a ‘bad environment’, that is, it was not safe. Walking from the bus stop to the apartment was a stretch.

For one who has generally been protected by family in particular, and one not sensitive to security issues then, I felt very fearful. I prayed that the opportunity to use the whistle would never come. It did not. I got my own apartment just a stone throw away from the hotel I was working at, just within a few days!

Now, that was long ago! So I was surprised when this image popped up in my mind after the just ended congress (of hospitality professionals in Ghana in Ho), upon hearing what I describe as the ‘cries’ of two ladies on two separate platforms.

Comfort, not her real name, is a hotel receptionist. I engaged her in a conversation about her career.  The other, Cindy(also not her real name), is a student, who I believe was representing a number of other students when she raised a suggestion during question time about the possibility of their institutions placing them for internship instead of they(students), going out to look for places themselves.

For most of us in Ghana, the whistle is associated with a referee, a coach or a police, not a distress call by someone at risk.

I also recalled a number of issues which are hardly discussed. I guess they have become ‘fixtures’ on my ‘imaginary list’ of outstanding issues in hospitality operations and hospitality education. They include the fear of abuse and the stigma attached to female workers in hotels in particular and the hospitality industry at large as well as the security and safety concerns of female students looking for their own places for internship.

The Silent Cry of Comfort
There is a fear among young ladies working in hotels of being stigmatized as having low morals. I heard it in the voice of Comfort. She was very concerned. She informed me she has been working in the industry for five years as a front office personnel. She however studied secretaryship. She has since been looking for an opportunity to get a job as secretary. I have personally come across a few  ‘Comforts’. Why wouldn’t they build on their rich experiences, sharpen their skills and develop their careers in the industry? I have always wondered.

Where does one start from… to change the social perceptions which have successfully scared females away from pursuing careers in the hotel industry as a result of the stigmatization the industry carries?

The Loud Call By Cindy
Could it be that behind the suggestion made by Cindy(representing a group of students), that they should be posted rather than be allowed to look for their own places of internship, is a real concern about security and safety?

These are genuine cries/calls to engage the discussion and these will be developed in subsequent articles.