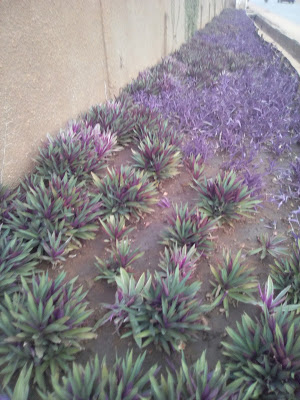 This long strip of land along a busy road right behind the fence wall of my house was not an eye sore until a man made the place his abode.

It was also the frontage of the house. Whenever it got weedy, I took personal responsibility to have the weeds cleared. I gathered and burned litters dropped by passersby or blown there by the wind. However since this man started ‘patronizing’ this space, there was an extra cleaning to do- burning with the aid of kerosene or diesel the garbage dumped there by him. He was a lunatic.

It was a whole operation: going out there as early as 5:00 a.m. when he was not there, gathering tied up garbage in black polythene bags, old shoes and rugs; avoiding touching them with my hands even though wearing gloves and setting the filth ablaze.

Whenever he came around, after the cleaning operation, he would sometimes just sit and stare or lie down and sleep. I could never tell if he ever got upset.

For close to two years, I thought I could do nothing about his presence which hunted me. Is there a law I could stand on to report him to the police?  A constant thought amused me; ‘here in Ghana; where does one go with such a report and be taken seriously?’

Many times I harbored my fears whenever  I had to get out of the car to open the gateand he was sitting there, although he seemed harmless.  I wondered if I could talk with him, beg him to leave? How would I say? Will he understand? How would he respond?

I found myself even praying about how to rid off this unwelcomed visitor.  Ah!  A garden!  The thought lingered in my mind. What should be planted? Thorny plants will obviously ward him off but that would be cruel of me and a lot of work for me whenever I had to work in this part of the garden. Grassing the area along with some shrubs will make the place quite inviting and comfortable, a haven for him.

I tossed and turned several ideas in my mind until I settled on the Tricolor dwarf oyster plant. These are purple foliage plants, easy to work with and which form a good ground cover. A few patches of purple Wandering Jew complimented my efforts. With its subtly attractive texture and color, the dwarf oyster has provided a neat appearance and a dense bed displacing the lunatic.

Now, he just passes by. I figure out he has found a new abode somewhere else; I do not know, but I would want to ask the owner of his new abode to try a hand at a garden to displace him!